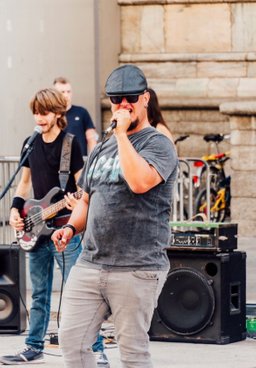 with music I was born, father bassist and clarinetist, grandfather saxophonist and uncle singer and saxophonist.

The piano was my first real contact with music, "key press" was my greatest achievement.

The study of sung solfeggio and melodic dictations were instead a fundamental basis on which I then built all my future experiences.

I have to thank my piano teacher, whom I "hated" at the time, for all this, for making me understand how to build a musical path worthy of the name.

I also played guitar and bass and I approached the rock and metal universe at a very young age.

I was part of a cover band that offered the classics of the genre, from Metallica to Iron Maiden, from Nirvana’s grunge to Ramones’s punk.

We wanted to break the world, but the only result was to smash the neighbors' balls.

A few years later I entered another cover project but also original songs, the line-up was me on vocals and keyboards together with three guitars and bass.

His success was discreet, playing in various contests, including national ones and in the most famous clubs in the South. Adrian, the current rhythm guitarist of HTH, also played in the group at the time.

In 2018 I moved to Milan and I immediately tried to enter the music scene.

I started in a cover band with songs also by AC/DC and on those occasions they made me notice the great similarity of my vocal timbre with that of Brian Johnson.

The band was not successful and so I start the search for a Tribute AC/DC, sending CVs and videos of some of my concerts.

It so happened that at that moment HTH were looking for a new singer to change their line-up.

We agreed for a first meeting and during the first audition the feeling was immediately clear.

My tone and the energy of the new band blended perfectly.

The very professional approach of the other musicians also struck me a lot ... commitment, presence, care of the image were and are the strengths of Highway To Hell.

Since that day I have been part of the band and through my voice and together with the others we are ready to give you strong emotions on the stages of the "worst clubs" in the cosmos and to make your eardrums vibrate to the sound of rock.