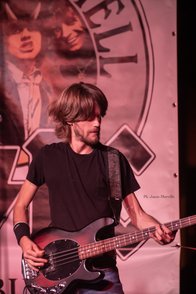 to be honest I have never listened to much music and had never considered it as my possible future passion.

One day I remember listening to an AC / DC song on the radio (what a coincidence huh?) And I was very impressed.

From that moment, the famous spark took off and a world opened up for me.

I spent a whole year devouring the entire discography of the Australian band, until a dear friend told me: “Why don’t you try to play an instrument?”.

I picked up my first guitar and started a first course of studies.

I wanted to get involved and I started playing in a group that in the end could not find a bass player to insert.

I decided to try it myself and in the end I never gave up that instrument again... the charm of the rhythm and groove that the bass manages to blend together is too great.

This band did not have reference artists in the repertoire but ranged from pop songs to metal songs… after a year I decided to end the adventure.

After other experiences in other bands, a work colleague was looking for a bass player to integrate into his project… so I started playing in “OndaCaustica”.

In this band, with which I still collaborate, I had a great musical growth, thanks also to the guitarist who for me was like a second teacher.

An AC/DC tribute that was still in the making contacted me, but it didn't last long.

Gioconda was my other band to which I gave and from which I received a lot ... another fundamental point for my training as a musician.

In the end, AC/DC was in my destiny ... thanks to a mutual friend, Highway To Hell contact me and I became part of it.

The fidelity with which they reproduce Young brothers’ lives immediately fascinated me, how can I say no to this proposal?

In the end everything comes back!