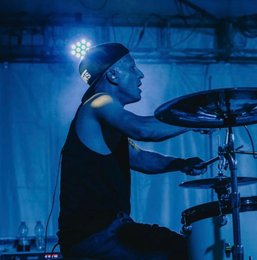 Born in Saronno on 21/01/1991. Since he was a child he was introduced to music thanks to his maternal grandfather, who was the master of the town band. At the age of 6 he began studying theory and instrument with his father (also a musician). Already as a teenager he approaches the world of drums with several teachers privately.

In 2018 he graduated in jazz drums at the Piacenza conservatory where he had the pleasure of studying with great masters such as: Stefano Bagnoli, Riccardo Fioravanti, Umberto Petrin, Achille Succi, Riccardo Dapelo and many others.

After completing his studies he entrusts himself to maestro Giovanni Giorgi with whom he further develops technique, styles, precision, style, groove etc.

There is no shortage of seminars with great drummers in which he participated such as: Federico Paulovich, Riccardo Lombardo, Walter Calloni.

Already while studying at the conservatory, he began teaching activities in various music schools. At the same time he creates a musical project for primary schools with which he manages to collaborate for five years.

He currently teaches at the "San Luigi" school of Garbagnate Milanese and at the Corbetta Musical Corps.