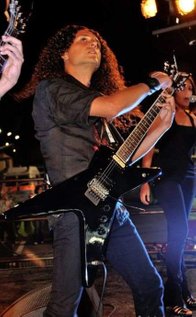 I am Adrian DARK, I am Sicilian by birth and Milanese by adoption, guitarist with strong hard rock & heavy metal influences.
Passionate about the instrument since I was a teenager, I founded and brought around southern Italy, with moderate success, a band of original songs clearly inspired by thrash and power metal.

Songwriter, arranger, lyricist, rhythm guitar and soloist, I played in many formations throughout Italy, participating in cover bands and groups with original songs, treading numerous stages of festivals, clubs and squares.
Never a mercenary and always faithful to formations, I dedicate myself with extreme dedication, firmly convinced that music is born from the soul and uses passion as much as technique.

Always a great admirer of AC/DC's musical engine technique, in Highway to Hell, I cover the onerous role of Malcolm Young giving the relentless and necessary rhythmic support to the band.